And if ... defective air flow meter

Hot-film anemometer with film gauge. It consists of very "gentle" elements, so it is repaired only in the factory.

An air mass meter or mass air flow sensor is a device that measures the amount of air entering the engine cylinders. There are several varieties that differ in the method of measurement. An earlier design is a flowmeter with a Pitot tube (the so-called blade type). The principle of its operation is based on measuring the deviation by air flow of a special plate, on the axis of which a potentiometer is mounted. The device resembles a throttle. Depending on the speed of the air flow, the angle of rotation of the plate changes, and accordingly, the electric resistance of the potentiometer.

More modern designs of the flow meter have a thermo-anemometric air flow meter. The principle of its operation is as follows. In the air stream there is a heat exchange element in the form of a platinum wire. The stronger the air flow, the more electricity must be supplied to it in order to maintain the specified temperature difference between the wire and the air flowing around it. To remove deposits on the platinum wire (about 0.07 mm in diameter), a self-cleaning mode is provided, in which, after stopping an engine that has been operating for some time under load, it heats up for a short time to a temperature of 1000–1100 ° C.

The most advanced flow meters are thermo-anemometric with a film meter. They have heating and measuring resistors in the form of thin platinum layers deposited on the surface of a silicon crystal.

Flowmeters with vortex type meters are also found. The principle of their work is based on measuring the frequency of turbulence, which appear at a certain distance behind the protrusion in the wall of the intake channel. It is worth noting that in many modern foreign cars instead of the air flow meter an absolute pressure sensor is used in the intake manifold.

Types and causes of malfunctioning

The wear of current paths is the main reason for the failure of "blade" flowmeters.

Each flow meter design has its own characteristic faults. For “blade” type flowmeters, this is the wear of the current-carrying surfaces of the potentiometers, the formation of oily deposits on the work items. The deterioration of the potentiometer (“cut through” the current-carrying path) leads to the periodic disappearance of the electrical signal, as a result, the transmission of distorted data to the control unit. Oily deposits and oxide on the surface of the channel hinder the movement of the valve (it is wedged). In the case of thermo-anemometric flowmeters, the cause of a malfunction can be the lack of its power supply from the vehicle’s on-board network, as well as unskilled servicing of this unit. Even attempts to wipe his work surfaces with cotton wool can disable the flow meter. This node is not serviceable and non-repairable. You can check only the reliability of the contact connection, and in the event of contamination, blowing with compressed air or washing the working surfaces with special preparations can help. 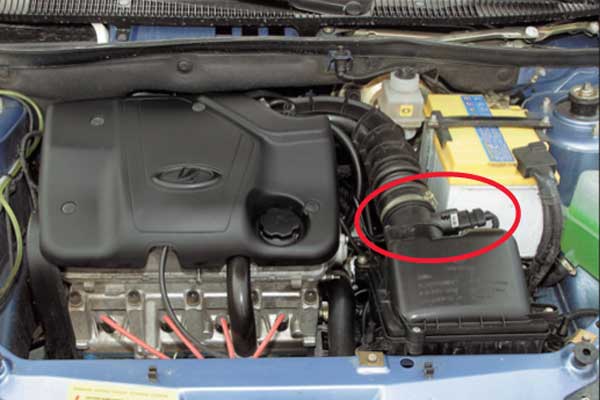 The flow meter is located between the air filter and the throttle.

In addition to external signs in the engine, the failure of the air flow meter can be reported by the built-in diagnostic system. Unfortunately, without diagnostic equipment, it is not always possible to read the error codes and determine why the Check Engine indicator lamp is “screaming”, therefore you should contact the workshop station. It is possible to be convinced of malfunction of a flowmeter of air, having replaced it with obviously good. If there is an improvement as a result - the reason is in the flow meter, there is no improvement - you need to look in another direction. Very often, similar to the external manifestations leads to air leakage through the joints or cracks in the corrugated hose running from the flow meter to the throttle module. 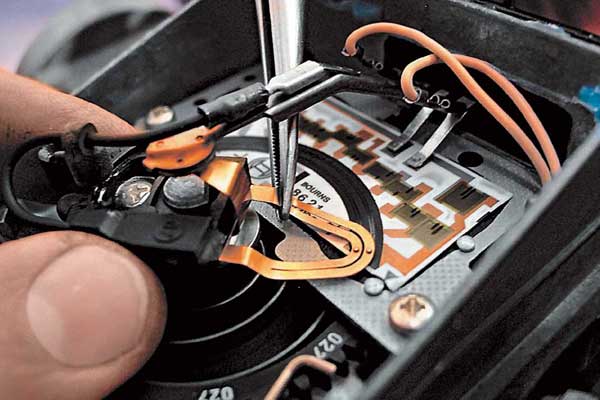 By bending the plates, you can move the slider to the unworn part of the track.

Most often, simply replace the defective flowmeter with a new one. Only flowmeters with a pitot tube (“blade” type) are repairable. Dirt and oily deposits that interfere with plate movement are removed using

aerosols for cleaning the carburetor. Sometimes it is possible to recover the potentiometer by moving its board with a contact track or bending the current collector plate so that the contact tip moves along the unworn part of the contact track. Sometimes wizards propose to disconnect the flow meter from the electronic control unit. But in this case, fuel consumption increases markedly. Thermoanemometric flow meters in the service station are not repairable. They are restored only in the conditions of repair production, for example Bosch.

In order for the air flow meter to serve longer, there are two means - to change the air filter in a timely manner and monitor the engine's technical condition (in some old power systems, where the hose of the suction system of crankcase gases “crashes” in front of the air flow meter). Repairing the engine can also prevent premature failure of the flow meter, since the wear of the piston rings and valve glands leads to an increase in the oil content in crankcase gases, and this, in turn, causes the flowmeter parts to become clogged with an oily bloom.

If you find an error, please select the text fragment and press Ctrl + Enter .